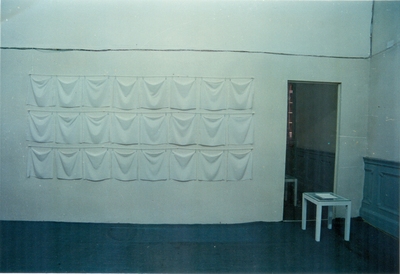 Installation, The Place of Language

"Membrane" involved covering one of the doorways with taught plastic film, pinning 24 pure white silk handkerchiefs on the wall in three neat rows, and placing a carefully folded silk handkerchief on each of two stools placed either side of the plastic membrane to create the impression of a mirror image. The work relied on audience interaction: walking in though one doorway and in the process breathing life into the hanging silk handkerchiefs which gently moved and fluttered as people displaced the equilibrium, and perceiving that the second doorway was in fact sealed and not a mirror. The silk handkerchiefs are, the artist says, "like young girls hearts in a state of flux, due to the lure of the outside world." The work may be understood as a poetic response to the age-old taboo against pre-marital sex. As Chen Yanyin has explained: "In China we have a tradition to determine the morality of a young girl. There is only one way. On the wedding night the groom’s parents give the couple a pure white handkerchief. On the morning of the second day the couple must show the parents the handkerchief and the necessary trace of blood indicating virginity." (Robert (translated by Wu ChenYun), Chen Yanyin: Giving form to emotion, ShanghART, 2015, Available on https://www.shanghartgallery.com/galleryarchive/texts/id/6887) (Jerry Wu'23).