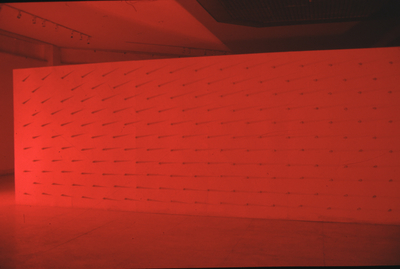 Chen Yanyin came to prominence in 1994 with a solo exhibition of the ‘Box Series’ (箱子系列) held at the Shanghai Oil Painting and Sculpture Institute, where she worked (and continues to work) as a full time artist. In the centre of the gallery she created a room within a room titled ‘Point of Origin’, the walls covered with sharp conical wooden spikes, the whole painted red. Viewers were lured down a corridor into an interior zone transformed by red light and the pulsating sound of a heartbeat toward a box containing a TV monitor with close-up video footage of a vagina as a woman reaches a state of climax. Elsewhere in the gallery seven exquisitely crafted box-shaped sculptures made from wood (a soft material chosen for its connection to life) were placed on the gallery floor. The works, titled ‘Box 1’ and so on, were also covered with aggressive looking spikes. Some are square in shape, others triangular, many with clam-like lids open or closed. ‘Box 5 ‘and ‘Box 6’ were given more explicit sub-titles, ‘The Unfertilised Egg’ and ‘Abortion’ respectively. ‘Abortion’, quite unlike other works in the series and strictly speaking not a box but a towering edifice pierced all over by tubes of metal, suggests the invasiveness and unnatural intervention. ‘The Unfertilised Egg’, the artist’s favourite work in the series, a square wooden box, made from honey-coloured wood chosen for the beauty and interest of its grain, stands somewhat precariously on a series of tapered conical spikes that attempt to pierce its base. A further set of spikes stand on the rim suspending the lid in mid air. They appear to pierce through the edges of the cover, creating a menacing decorative effect. Yet more spikes are attached to each of the four sides of the box below the rim, giving a feeling of attempted rupture. The box is at once solid and vulnerable, the bright light emanating from its smooth interior symbolic of the potential of love. ‘Point of Origin’ and works in the ‘Box Series’ confronted viewers with imagery not normally seen in public, and with abstract forms that gave shape to a female perspective on love. Chen Yanyin later reflected that in ‘Point of Origin’ she first achieved ‘intensity of sensitised and psychological stimulus.’ ‘The audience,’ she said, ‘can enter the box and directly participate in my emotional world.’ (Roberts (translated by Wu Chenyun), Chen Yanyin: Giving form to emotion, ShanghART, 2015, Available on https://www.shanghartgallery.com/galleryarchive/texts/id/6887.) (Jerry Wu'23).