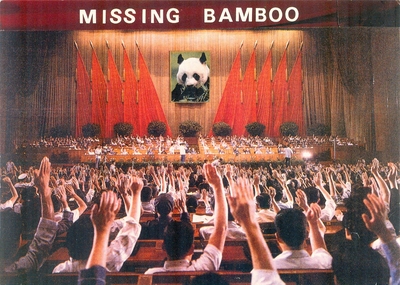 This work is part of the installation art titled “Missing Bamboo (想念毛竹)”, which is one of the artwork in Wu's "Red Humour International" series. “Missing Bamboo” was exhibited in the Wexner Center for the Arts in the Ohio State University, USA in 1993. The image on the postcard depicts a Chinese political convention at which a resolution is being passed by hand vote and the national seal above the stage has been replaced by a portrait of a genial panda (Gao, p12). At each side of the portrait, there are four enormous red flags standing in front of the yellow curtain. On top of the panda portrait, a headline titled “MISSING BAMBOO” is shown on a red rectangular screen. According to Gao and Andrews, most installations from Wu’s Red Humour series create a political atmosphere without stimulating any concrete political content. The result is a mockery of the government, of society, and probably even of the artists themselves. Further, it is suggested that Wu’s games with the visual language of Chinese politics reduce the deadly phenomenon of the Chinese political movement to nothing more than “red humor”. Hence, scholars propose that "Missing Bamboo" “comments directly upon the relationship between art and commerce, but the multilayered irony of his work, based upon his Chinese imagery, is charged by his combination of the mundane and exotic” (Gao Minglu, “What Is the Chinese Avant-Garde?”; Gao Minglu and Julia F. Andrews, “The Context in the Text: Meaning in Wu Shanzhuan’s Work”. Available at: https://monoskop.org/images/c/ca/Fragmented_Memory_The_Chinese_Avant-Garde_in_Exile_1993.pdf). See link below for the back of this postcard. (Yifan Shang ‘25)