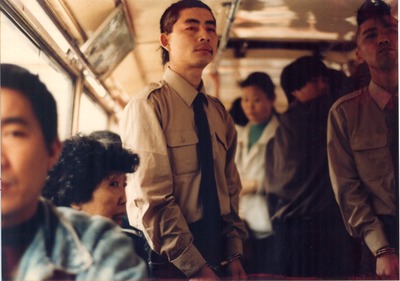 Artist and his partner, handcuff, and more

Two people, artist Wang and his artistic partner, one day in 1994 boarded onto a public bus in Beijing. However, one particularity about these two passengers is that they were handcuffed -- by themselves. Various reactions from the surrounding passengers were elicited: some astonished, some casting doubts on whether the two people are criminals, and some questioning the artists' mental health. This action art accomplished mainly three things. First, it drew a boundary between art and non-art, simply by putting on a symbolic tool of handcuff. The artwork also posed an overt challenge to social norms and orders, presenting itself as an anomaly to society at large. And also, the work tested the general public's reactions to anomalies, outliners of social orders. (artda, 王劲松（Wang Jinsong）, 2010, available on https://www.artda.cn/yishujiakuguonei-c-3280.html). (Jerry Wu'23).