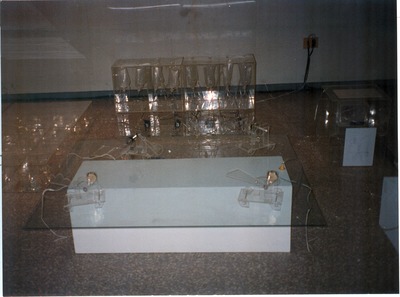 The installation starts with four original liquids (referred to as "X"). The liquids were inputted into the first program -- involved perhaps with some sort of filtering. The resulting liquids were inputted into the second. The process repeated itself 5 times in five different programs. In each of the program, the results (called "states") were recorded, adding a part to the work as a whole. In addition, at the start and end of the liquids' journey, another parameter was measured (referred to as "Y"). From his proposal, we learn that Wang wishes to simulate the process of human pregnancy from the mechanical installation. The four liquids involved in the work represent "weight", "blood pressure", "height of the womb", and "size of the abdomen" respectively. Within program (time), the liquids (parameters of pregnancy) changed or evolved, "giving birth" to an eventual result. The special parameter "Y" recorded only twice in the work indicates "states of biological incubation". (Wang, Proposal for "Reproduction", see Zhou Documents). (Jerry Wu'23).