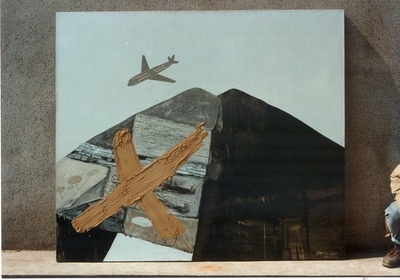 Acrylic, oil on canvas, and more

After completing/starting the "Diagnosis" and " (xx year) Great Landscape" painting series in 1994, Shang in the next year conducted another series -- "Diagnosis of the Great Landscapes". As the amalgamate title tells us, the new series is likely to distill the most urging themes of the previous two works and to merge them together. In "Great Landscape 1994", Shang resorted to a sectioned imagery of volcano to remind the viewers of potential threat of the post-modern society -- that when different values coexist, conflicts would ineluctable occur, and thus could cause epistemic suffocations (see entry in ZYCCA). "Diagnosis" is a painting series Shang created to underline the "modern" social phenomenon of accepting defaulted social values, without criticality (see also the entry in ZYCCA). "Diagnosis of the Great Landscapes" may essentially want to highlight the same issue as in "Diagnosis", but adding a flavor of the "Great Landscapes" series -- pictorially and thematically -- to give the work's message a smell of urgency, the "suffocating" sort of urgency. Shang once said :"From the various social connections, 'breathing' has lost its natural state. A modern society that is fully materializing makes all spaces (physical and psychological) appear crowded. The and erosion of 'breathing' permeates almost everyone's living space and life process. The problem is actually acute and pressing. However, like the unconsciousness of breathing, they have not been truly and clearly realized, and their compelling issue are also here. (translated from Chinese)" Think the metaphor of "breathing" as critical thinking, and think back to the painting series. (Yu, “大风景”：尚扬的艺术世界, 2008, from 《文艺研究》, available on http://www.artnow.com.cn/CommonPage/ArticleInfo.aspx?ChannelID=274&ArticleID=15015) (Jerry Wu'23).