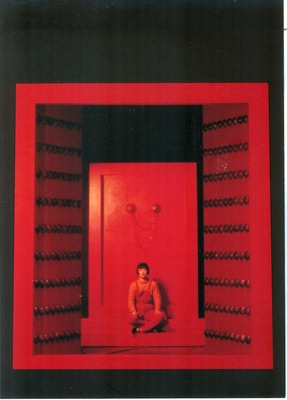 Two gates give this large installation its form. One would need to pass through the outer door in order to access the succeeding one. From a distance, the outer door resembles greatly to the one that one might observe in the Chinese Palace. In fact, the door in the work, the artist Qiu said, took the citation exactly from the door of traditional Chinese Palace, a stark emblem of the emperor, often masculine, power. When one approaches the outer door, however, he/she would soon spot that the door nails take the genderly suggestive shape of breasts. A total of 81 nails are fixated by the left door panel, implying the Emperor's 81 concubines, of whom, were usually disenfranchised of liberty as one entering the gate of the Palace. The second gate is installed inside the outer one. Only two door nails are present on the inner door, as well taking forms of female breasts; their quantity and placements only make the symbolic allusion more apparent. Between the two door nails (breasts), two metal chains are used to connect and yet, at the same time shackle them together. The chains hooked upon the telling symbolism of femininity communicate the constraints and suppression Chinese history has imposed on women. (Qiu, Chinese Gate 1991 Berlin, from the artist's official website, available on http://ping-qiu.de/?Galleries/Installation/Chinese_Gate&pic=1&page=0); see also (Kreis, About the one who left to learn to laugh freely, 1993, from the exhibition catalogue of "Chinese Gate", available on Zhou Documents) (Jerry Wu'23).