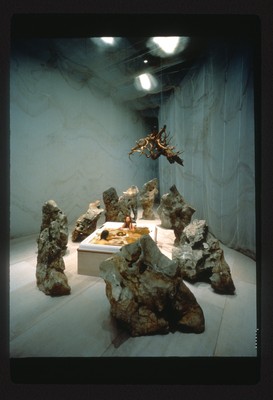 “For Cultural Melting Bath, Cai Guo-Qiang makes full use of the Museum’s largest gallery of approximately 2,000 square feet, with 30-foot high ceilings, to create a microcosmic universe. The installation includes four major elements: 1) Translucent Chinese fabric lines the walls and spans the ceiling of the entire gallery. The netting will create, in effect, a second enclosed chamber within the gallery, delimiting the boundaries of a microcosm; 2) Massive Taihusu rocks of varying shapes, each weighing between two and three tons, have been excavated from Lake Tai in Jiangsu Province in China for this project and shipped to Queens. Each stone, carefully chosen for its characteristics, is placed in the gallery according to the exacting principles of fengshui, the Chinese understanding of how qi (energy) flows throughout the universe. Placed to stimulate the flow of energy, the rocks will bestow positive qi on the Museum and its visitors; 3) Live birds will live in banyan tree roots, also from China, hanging above the rocks and suspended below the net ceiling. Through their flight, the birds will define the gallery’s new dimensions; and, 4) A medicinal herb bath, contained within a Western-style hot tub, will be located at the far end of the gallery, sheltered within the rocks. Giving the term “melting pot” a literal reality, Cai will invite various individuals to bathe together in the tub of healing waters. The remarkable diversity of Queens’ population at the end of the 20th century is a consequence of the social, cultural and political conditions of that century. Cai fuses East and West in his therapeutic Cultural Melting Bath as a metaphor for social healing in the coming century.” (Queens Museum of Art. (1997) Cai Guo-Qiang’s Cultural Melting Bath: Projects for the 20th Century, August 1 - October 26 [Press release]. Print.)