B05.001 Funerary Complex of King Zoser 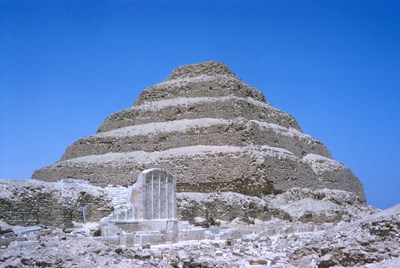 The famous step pyramid in the funerary complex of the great ancient Egyptian King Zoser. The complex was "built in about 2750 B.C." and intended to be "a residence for the after life, a replica of the royal palace, and a stage for the enactment of the elaborate rituals and festivals of kingship." King Zoser was "assisted [in construction] by Imhotep, the first recorded architect in history, who was later deified by the Egyptians. Even Imhotep seems at first to have conceived his patron's tomb as a large example of the traditional mastaba ["bench-shaped quadratic masses" that served as tombs] with a difference building material: instead of the customary sun-baked brick, huge blocks of cut stone were used. No sooner was it complete than it was enlarged, then enlarged again. Still the builders were dissatisfied. At this point a leap of the imagination transpired: the successively enlarged mastaba became the core of a huge superstructure built over an extended rectangular plan 411 by 358 feet, with five sloping setbacks toward the top, now 204 feet high. The first pyramid was thus not the better-known, pure, geometric form, but instead a step pyramid." In addition to the pyramid itself, the remnants of the facade (the small structure next to the base of the pyramid) imitating reed columns are also visible in this image. -MA (Source: Marvin Trachtenberg and Isabelle Hyman, Architecture, from Prehistory to post-Modernism: The Western Tradition (Englewood Cliffs, NJ: Prentice-Hall, 1986), 53-5).