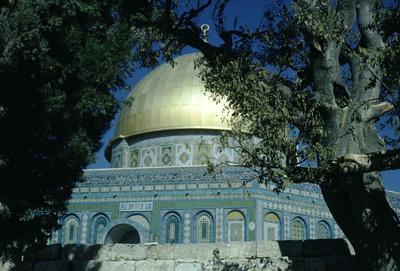 007- Another close up of the Dome of the Rock. The dome in its current form dates to 1999. However, the earliest written sources do point out to its golden appearance. In 1000 CE, this was replaced with black lead, and stayed for almost a thousand years before it was gilded in 1960-62. The current version imitates the 60s renovation. In fact, most of what one sees in the building, both inside and outside, was put there in the second half of the twentieth century [Oleg Grabar, The Dome of the Rock].