Two Men with a Michigan Car

This 1932 photograph depicts two men in Lansing, Michigan who work for The Olds Motor Vehicle Company, which later became Oldsmobile. H L Thomas was the main engineer of the 1903 Oldsmobile and the 1910 REO model. His colleague has not been identified by name. This photograph seems to cross the boundary between documentation and advertisement. It represents a time and an American pastime, yet glorifies a particular company and its engineers. It is a wonderful example of Americana. Oldsmobile was produced by General Motors and its founder, Ransom Eli Olds who was a pioneer of the American automotive industry. He is credited with the modern assembly line of 1901 and was followed by Henry Ford who improved upon Olds’ idea by putting in a conveyer belt. Therefore this photograph represents a very important contribution to America’s history. The assembly line was an innovation that changed our world and defined American production. This nostalgic sepia colored photograph preserves our history and speaks of America’s technological advancements with a simple image. Most importantly it equates people with the advancement. It couldn’t have been made without American intelligence and it represents a celebration of what humans have accomplished. It documents, and connects us to our past. The photographer made sure to reveal the license plate so that the viewer would be able to identify the birthplace of the Oldsmobile. He celebrates American history with the reference to a particular state. It provides us with some information, but not too much. The men look prideful, as they stand next to their creation much in the same way that portraits from the Renaissance include books and props that speak volumes about their subjects.

Black and white photograph of two men next to a car with a Michigan license plate from 1932. One of the men is H. L. Thomas the main engineer of the 1903 Oldsmobile model and the 1910 REO model. Both men worked for the Olds Motor Vehicle Company, based in Lansing Michigan. The Olds Motor Vehicle Company was the first automobile company to use the stationary assembly line. 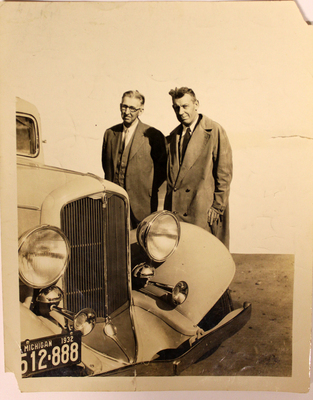