Funerary photographs (2 copies of one photograph) 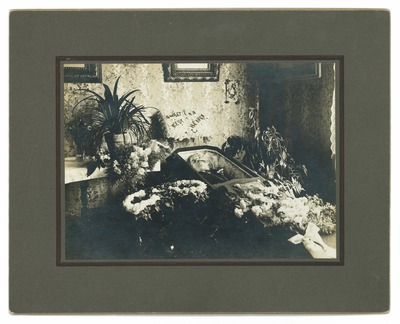 In the first photograph, the coffin of Tilda Aronson is beneath the altar signalling a powerful memento mori. The coffin is centered at the front of the church to symbolize “A Service of Death and Resurrection." It was commonplace in the United Methodist Church to march the casket to the altar before burial. In this photograph, Tilda’s casket is closed and is adorned by bouquets of blooming lilies. The second photograph is of Tilda’s husband, Anders Gustaf Aronson, in a decorated funeral home. Aronson’s casket is partially open with crowding flower arrangements surrounding him. “sweet rest in heaven” from the Book of Revelations is written above his head in flowers. This verse states that “the dead from now on die in the Lord” granting them an immortal soul. These words were sung as mourning hymns at Methodist funeral services. These two photographs are excellent examples of the transition between the earlier and later styles of memorial portraiture.

Black and white photograph of Anders Gustaf Aronson in his wooden casket at his funeral. "Sweet in Rest Heaven" written in flowers above head. Early 20th c.