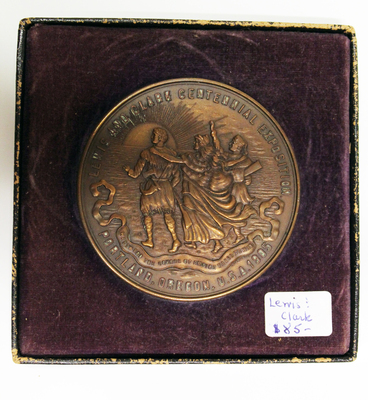 This small medal was made by the Butterfield and Brothers Company to celebrate the 100-year anniversary of Lewis and Clark’s expedition from Missouri to the Pacific Coast. Engraved on the banner of this object it states “Westward the Course of Empire Takes Its Way,” revealing the intention behind the Lewis and Clark expedition as well as the intention behind the creation of this object. The Lewis and Clark expedition proved to a point of national pride, for the successful expedition seemed to prove America’s might despite its young age. This expedition was also part of the larger 19th century push toward Western expansion widely labeled as “Manifest Destiny.” Manifest Destiny was the belief that America was destined to expand westward and that they were owed the land in the West. This idea was perpetuated throughout many forms of media and propaganda, with media widely disseminating the idea that Americans were owed this Western land and should therefore expand using any means necessary. Lewis and Clark’s expedition was the first time much of the West was explored by Americans, and the expedition and their writings served as one of the first accounts of this previously undiscovered land. It was accounts such as this that were used in propaganda that further perpetuated the arguments of Manifest Destiny, leading to the wars that acquired Texas from Mexico and Oregon and Washington from Canada. To garner popular support for such movements, accounts from expeditions like Lewis and Clark’s were essential, as they showed the wonders, beauty, and unknowns of the “Wild West.” The commemorative medal re-emphasizes this idea one hundred years later, particularly in this engraving, as it purports America’s status as a great empire. This speaks to the purpose and power of commemoration in forms such as this, as commemorations have the ability to continue cultural narratives long past their origins. Commemorations have the power to rewrite the past in our modern consciousness, showing the constructed nature of history. Although commemorations are intended to accurately preserve and pass on the memory of individuals and events, this commemoration proves to not only be useful in terms of memory, but it also proves to be useful in reinforcing certain cultural narratives and understandings of history. Objects like this then beg the question - is all cultural memory mediated through various perspectives or can memory be “accurately” and objectively preserved through objects?

A commemorative medal by the Butterfield and Brothers Company. On the obverse it states "Lewis and Clark Centennial Exposition/ Portland, Oregon, U.S.A 1905" and in the banner it states "Westward the Course of Empire Takes Its Way". Meriwether Lewis, Sacagawea and William Clark are advancing towards the western Sun. On the reverse is an area for engraving surrounded by a ribboned wreath.