This small stone stone before us represents millennia of written language. Cuneiform was a written language developed by the ancient Sumerians of Mesopotamia in around 3500-3000 B.C.E. The language continually evolved for about three millennia. First the Sumerian language consisted of images and then through time translated these images into thin crossing lines. The word for “cunei” comes from the Latin word “cuneus” meaning wedge, referring to its wedge style lettering. The words were carved into the tablet by a blunt reed. The clay tablet before us holds hundreds of these lines on a very small surface. The characters look like they are layered upon other words or patterns. Perhaps this surface was used for more than one time using two different versions of the cuneiform. Towards the bottom righthand corner we see a darker more linear form while in the center of the piece we see a more roach inscription with larger forms. Two pieces of the stone are missing. Despite its unassuming appearance, this small stone represents the bedrock of our literary society as it contains some of the earliest evidences of writing. This stone has deteriorated through the years showing its rich history. It shows three different colored textures. The inside, where the piece has broken off, has a light brown tint, which also shows through underneath some of the engravings. On the edge of the break, there is a darker rust colored stone. The front of the stone is smoothed over from time and has a dark brown stain. Its image has been preserved and saved for thousands of years. Photographs of such a small object cannot capture the true presence of the stone. It is a ruin and an icon. It has decayed but the carvings and designs still remain today. Cuneiform looks more like a work of art rather than a language to our modern eye. (im)permanence questions why we save and collect objects that we do not have personal relationships with. Why do we keep and collect historical objects like this one? Is it for our individual or collective memory? 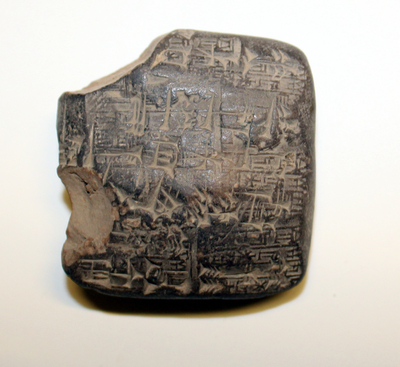