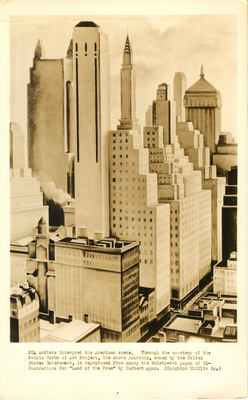 Featured in Herbert Agar’s book of American landscape prints, Land of the Free, this print speaks to civil agitation brought upon by the industrialization in the early-1900s. Agar was a reputable American journalist, historian, and winner of the Pulitzer Prize for History in 1934. He documented post-World War crises and their effects on American government, society, and economy. The prints featured in Land of the Free were made possible through the courtesy of the Public Works of Art Project (PWAP). During the Great Depression, this program was started to employ artists as part of the New Deal. Artists working for PWAP were commissioned to depict the American scene; their art was featured in various locations, including the White House and House of Representatives. This economic program helped showcase the talent of many up-and-coming artists while lowering the unemployment rate.

This print reflects the civil agitation and unrest brought upon by the industrialization in the early-1900s. Between the 1880s and the 1930s, urbanization expanded rapidly to major cities drawing the attention of young farmers and millions of immigrants seeking a better life. People flocked to major cities with the hopes of more opportunities and a better future. With these technological and social advancements came an overwhelming sense of anxiety particularly because people were dealing with the aftermath of World War I and held in the midst of the Great Depression.

Depicted here are minimalistic buildings with some attention to detail and a hazy background. The dull and somber quality of the print reflects the apprehension and chaos felt by citizens as their pastoral landscapes dwindled into architectural clusters. Formerly depicted as an agrarian society, the shift to industrialize brought tension to generations losing their lands to factories. By excluding natural elements, the artist is drawing more attention to the tension caused by sudden change. The print exudes an almost desolate and isolating notion by having some of the buildings fade off in the distance with a lone chimney, hinting at human presence. The buildings are purposely crammed against one another displaying the new grid system that accompanied industrialization. In turn, the preservation of national identity became a major political concern, after the once-perfect rural landscapes that defined America were being turned into building grounds.

Among his other works, Agar features prints contrasting developed cities like this one, with the slow development and industrialization seen in rural parts of America, like the other Agar print depicting an agrarian landscape. This American scene depicts the average day of the hardworking farmer and the pleasure of the job. Yet, by capturing this moment the artist hones in on the perfect past that will be no more. For even farming has been industrialized and massively altered today.

Description under the illustration reads, "PWA artists interpret the American scene. Through the courtesy of the Public Works of Art Project, the above painting, owned by the United States Government, is reproduced from among the thirty-two pages of illustratons for 'Land of the Free' by Herbert Agar. (Houghton Mifflin Co.)".