Stereoview Photographs of Rome from the Early 20th Century 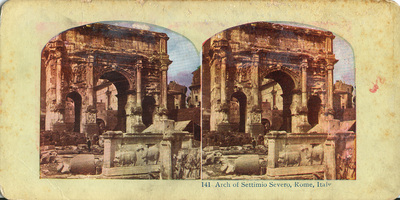 Known as a precursor to three dimensional entertainment, the stereoview photograph is an interesting signifier of how we wished to remember or experience people and places around the world in the 19th and 20th century. Created in 1833 by Sir Charles Wheatstone, the stereoscope uses a card featuring two similar photographs of the same subject. As our brains naturally combine what we see through our left and right eyes into one image, when viewed through the stereoscopic lens, the two photographs meld into a single visual, creating an illusion of greater spatial depth and dimension. While this stereoview photograph features Roman landmarks the arch of Septimius Severus, and on the reverse, the Colosseum, the subject of these photographs ranged from famous monuments, notable figures, local history, genre landscape, and architecture. Becoming popular in the 1850s, stereoviews where seen as a form of entertainment and an opportunity to be temporarily transported to another place. While these photographs may have been used as reminders of personal travel experiences, this mode of viewing specifically resonated with those who did not have the opportunity to travel but were curious about the world. This technology soon gave way to movies and illustrated magazines in the 1930s, however the stereoscope continues to encourages a sentimentality about place and one’s interest in the world’s many scenes.