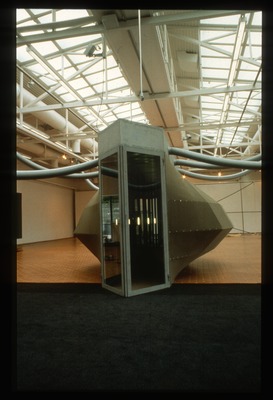 Museum of Art in Porin, Finland

"The centre of the space [in the "Out of Center" exhibition in Museum of art in Porin, Finland, 1994] was dominated by the impressive 'human machine' of Chen Zhen made of glass and felt and connected to the air conditioning system of the museum by an arterial network of plastic tubes. On approaching it, a door opened and led the viewer inside, where an electronic mechanism maintained a constant temperature of 37°C, the temperature of the human body. This universal human factor, governed by the laws of nature, has nothing to do with identity, race or culture. The analogy between this installation, which became an organic part of the museum structure, and the human body, enables us to see a possible coming together of man and nature in a hybrid culture. (Jouanno (Translated by Elena Bonzanigo from French), Out of the centre: Or Without the centre, Routledge, 2008, available via DOI: 10.1080/09528829408576519" In CHEN Zhen's won account of the work, he highlights the formal resemblance of the work to a bug attached to the ceiling. In making the parallel, CHEN Zhen wishes to note the implied futurism echo in the work as well as it sheer absurdity (Chen, project proposal - 37°C, Human Body Temperature, 1996). (Jerry Wu'23).