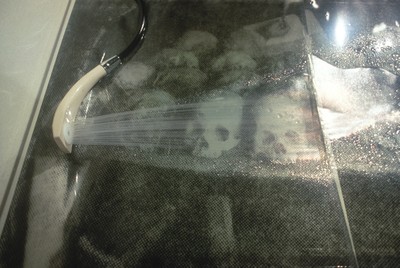 This photograph shows the remains of Chinese laborers who were buried alive during World War II. Chinese people in Datong were forced to do coal-mining for the Japanese army after Shanxi province was conquered, six thousand of them died because of exhaustion, starvation and coal-mining accidents. In this artwork, the photograph is washed by recycling water, which expresses a form of “forgetting”, as if “washing away the memory” of the shameful history of the Chinese nation. Wang Youshen utilizes this visual experiment to show his idea of “communicating with the audience through artworks”. (artda.cn 艺术档案, “王友身 (Wang Youshen)”, https://www.artda.cn/view.php?tid=1174&cid=28.) (Yifan Shang ‘25)