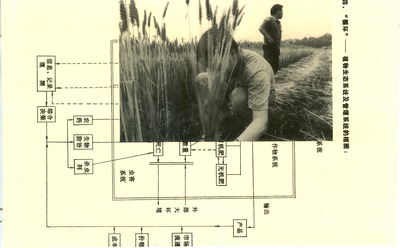 In this extended action art, Wang JianWei first contracted a vast area of land in Sichuan, China in 1993. Contracted along with the land were a group of agricultural professionals -- to ensure the success of cultivation. As the preparative works are done for cultivation, Wang divided the land into two parts, one planting wheat while the other planting rice (bi-seasonal product). Under the professional's advices, Wang employed fertilizers and pesticides to aid the crops' thrive. After the crops have ripen, Wang submitted reports to agricultural authorities about his deinsectization experiences, expected improvements of the crops in future, etc. As the crops were completely harvested, Wang also engaged with their marketing (selling), seed preservation, public food contribution, etc. The artist, in short, engaged himself entirely in the productions of the two crops, from the very scratch to the last tail. His complete dedication shines lights on the work's central theme; that "process", something that is often omitted as more and more people focus on "results", should be emphasized, and be taken as a fruit no less than the "results". Therefore, the work to Wang is not to create something, but to "collect" different moments of cultivation. In his words, "I’m not really creating anything that nobody has ever seen before…it’s reenacted, but it’s already there… Sometimes what we can see is not necessarily everything that influences us, and there are a lot of things…that are not existing with us at the same time. [...] and what I do is put all these things together at the same time and in the same space.” (Wang, Proposal for "Circulation", see entry in Zhou Document; see also Whittaker, WANG JIANWEI: MAN IN-BETWEEN, 2011, LEAP, available on http://www.leapleapleap.com/2011/06/wang-jianwei-man-in-between/). (Jerry Wu'23).