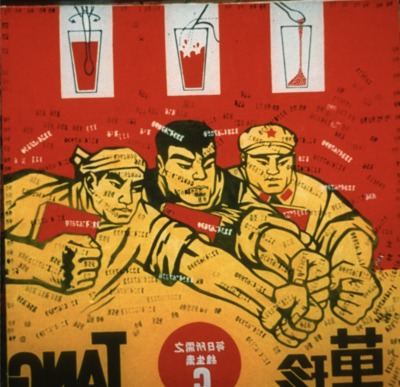 Three parallel figures emerge from a red background. In their left hand, they all hold a red book; and their right hands -- fists -- are uniformly stretching outward, converging into one point. hese figures, judging from their garments and symbolic postures and items in hands, form a representative image of Chinese Communism; or if inserting the image into its specific contexts, Cultural Revolution. Above the figures, there appear to have three illustrations (reading from right to left) explaining how to make a powdered juice drink. The drink could be a product of American drink mix brand "Tang" （果珍）, of whose logo and promotion are inserted at the bottom of the canvas. "Great Criticism" was an extended series WANG worked from 1990s to 2007. In 2007, WANG put a halt on the series, claiming that the series' success would distort and smudge the work's meanings. One major attempt of this "political pop" artwork was to liberate "art" from its exclusive, esoteric high throne, and to further avail it to general public. WANG in the work cited two of such practices in art trend -- across the globe -- "Cultural Revolution" propaganda art (in China) and Commercial Pop art (in the United States). A resonance of cross-cultural artistic movements is reflected in WANG's citations. (Wang, 王广义《大批判》系列作品, available on https://m.sohu.com/n/452112377/?wscrid=32576_3); see also (Wang, Artist Note: on "Great Criticism" 关于“大批判”的想法, 1996, available on ZHOU Document). (Jerry Wu'23).