The Corpses in the Ring 戒指中的尸体 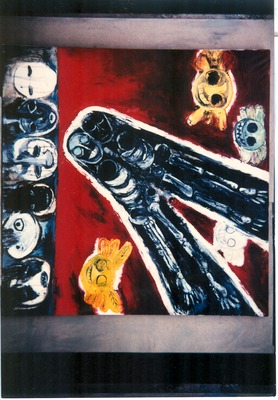 The background of this painting sets in a sea of flaming red, coalesced with darker grey and black. Scattered in the stage set are four human-head skeleton imageries. Surrounding the "heads" -- next to the "ears" -- are a few extended limbs or tentacles -- think of the whole imagery in the shape of crabs. The "heads" face the audience frontally, and greet them with a smile, or should I say, a smirk. Below the red stage, there appear to be more anthropic depictions, more "human heads", arranged in parallel to each other. Echoing with the velvet background, the "heads" by the work's bottom act like the spectators of the drama narrating in front of them. Back to the stage, the main space of it is occupied, intruded, by two cylindrical insertions from top-right. The two converging cylinders of paint (in black or dark blue) capture two human skeleton within respectively. The two "bodies" eventually meet each other at the converged end. If paying attention to the skeleton depiction, one finds that below their neck, a few rings (in jewelry terms) replace their ribs to support their torsos, pointing to the work's title "the Corpses in the Rings". The encompassing allusions to death, or "vanitas", marked SUN's much favored subject matter in the early 1990s. (Li, 图像的创世纪， 2004， ChinaArt.com, available on http://www.echinaart.com/artist/SunLiang/SunLiang_interview2.htm) (Jerry Wu'23).