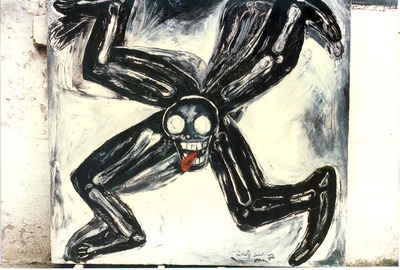 "Monstrous" is the impression one could almost immediately give to the work. Illustrated at the center of the composition is exactly a imagery of monster -- sharing some anthropic characteristics, like bones and joints, but is nonetheless distorted and detached from human anatomy. The center of the "monster" is its head, taking shape of a human-head skeleton, and is facetiously sticking its tongue out to the audiences. Joy communicated in its chaffing act is in tandem with the deadly implication of its form. Expanded from the "monster's" head are its four (or more?) limbs; they expanded in a circular, fan-like way, with approximate angles niching between. (Think of a four-legged spider). The limbs of the monster, just like its head, are not covered by any skin tissues, utterly exposed in skeletons. The placements of the "monster's" limbs, along with some of the vestiges of them, imply that it might be in motion. Moving towards us or away? We can't tell. But its implied motion grants the "monster" the organic power -- "it is a living thing!!" -- which ultimately adds to its menacing existence. Though "death" is a theme frequented many of SUN's works from 1983-1991, "A Bizarre Walk" renders us directly a vivid, half-personified imagery of death. (Li, 图像的创世纪， 2004， ChinaArt.com, available on http://www.echinaart.com/artist/SunLiang/SunLiang_interview2.htm) (Jerry Wu'23).