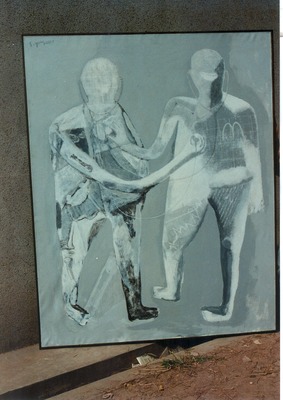 In the Spring of 1994, the artist Shang was hospitalized due to bodily discomforts. In a series of physical examinations, the artist was greatly inspired and thus created the art series "diagnosis". The painting series register a painterly travesty of medical examinations: human presences in the works are reduced to outlines and tonal shadows, the internal structures of human body (organs and entrails) are turned into imageries of Modernity (fast-food, automobiles, etc.); only the medical apparatus -- stethoscope, for example -- reserves its realistic form. In the artist's parody of his experience, he might be self-diagnosing a "disease" of the era: the unquestioned, uncritical agreement to a social voice (norms). Some among the most glaring markers and temptations of Modernity -- cars, fast-food depicted on human body, for examples .. (possible allusions to hedonism) -- have been internalized into Modern era's values, without much critiquing voices. Shang in this series might wanted to play the role of doctor, and to provide a socially epistemic diagnosis to his audience. The roles of "doctor" and "patient" in the works have been reflectively swaped. (Yin, 超越生活——关于尚扬的近作》，published in 《中国油画》(Chinese Oil Paintings), 1995, available on https://m-news.artron.net/news/20210517/n161327.html); see also (Yang, 《中国当代油画名家个案研究——尚扬》, published by 湖北美术出版社 (Hunan Art), 2005, available on https://m-news.artron.net/news/20210517/n161327.html) (Jerry Wu'23).