A Garden Within a Garden（花园里的花园） 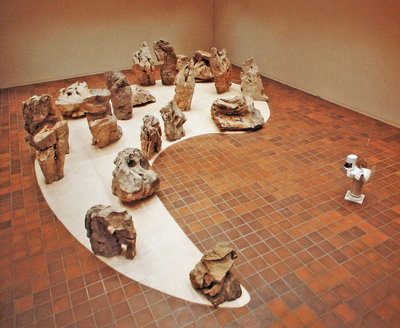 “The Taihusu rocks, found in Tiang su sen in China, are called ‘rocks of the soul’ or ‘Heavenly sound rocks.’ These rocks which have been shaped by the earth’s development through several hundred million years manifest a supranatural spirituality. It can be said that they undoubtedly hold a universal expression. Sometimes they look like live beings, and they even appear very sensual. From ancient times rocks like these have been loved by people in China, and by placing in gardens like man-made mountains, islands, etc. the character of the site has been transformed. It was an important material to express the aesthetics of Yixiaoguanda: visualizing large objects by looking at small objects (eg. seeing mountains in rocks). It was also the subject of the landscape paintings of the scholars. “The composition of these rocks is created anew in order to create a garden within the Louisiana Museum, which in itself resembles a garden. The creation of a garden within a garden. The rocks expand into an installation representing the themes of inner/outer, East/West, Yin/Yang. “The visitors walk around the installation flying paper kites. They drink an infusion of mushrooms, an old Chinese herbal medicine. They breathe the anaesthetic smoke of moxa. Maybe they experience a flow of qi or the world of xianren (the immortal sage).” (Fuchs, A., & Lund, E. (Eds.). (1997). Flying Dragons in the Heavens (A. Mester, Trans.). Denmark: Louisiana Museum of Modern Art.)