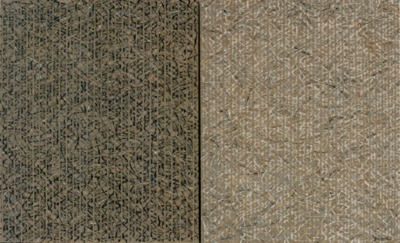 This painting on linen is demarcated into two parts by a thick, black line at the linen's center. The overall compositions on the two folds are very similar: each fold shares numerous parallel, vertical, all-encompassing lines in the color of the linen itself (perhaps was achieved by taping the linen before applying paints). The main difference informs the two parts is the major color tone used to compose the disordered, intersecting lines between (and sometimes underlies) the vertical ones preserved in the linen's original tone; while the left fold adopts black, the right side goes for white. "Line Field" series at its initial stage to the artist was an experiment and exploration on the relationships between point, line, surface (2D), and eventually, spacial units (3D). Later on the artist was interest to explore the intersecting spaces (line over line, for example), the alternating representations of the "real" and the "virtual" (perhaps by factures), and what an art writer termed "formal aestheticism". (He, 「線．場」秦一峰個展, 2016, 欣传媒 Xin Media, available on https://www.xinmedia.com/article/77051) (Jerry Wu'23).