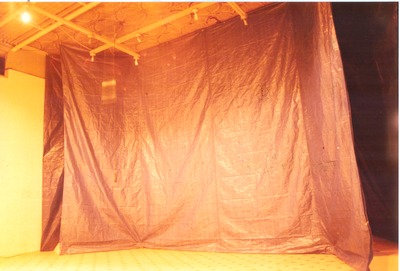 Not Here Not There Installation Show

At the center of the gallery hall, artist Qian constructed an enclosed, doubly bended (think in the shape of the English letter "C") corridor with car tarpaulins. On the corridor's ground, Qian sequentially placed a total of 28 weight scales, until the entire hallway ground was occupied by scales. Each of the scales was digitally connected to the corridor's automatic lighting system: when weight is applied to the scales, they would send commands to the light to either turn it on or off. While the odd-number counts (scale # 1, 3, 5, 7... for examples) of the scales were set to turn on the light, the even-number ones (scale # 2, 4, 6, 8... for examples) were designed to turn the light off. When audiences walked through the alley, the illumination would be called on and off by their passage. In addition to the lighting system, the scales were also communicating with the installed digital displays on the wall, of which wrote out the audiences' weights as they walked on the scales. (Qian, Project Plan for "Gravity Passage", 1995, available on Zhou Documents) (Jerry Wu'23)