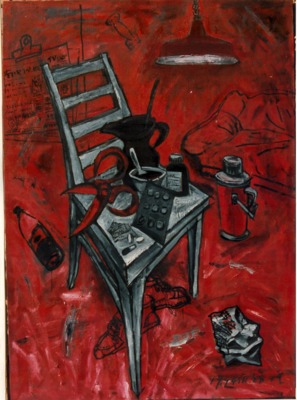 Upon a viscerally red background painted with splashes, a number of quotidian objects are rendered in what seems like a domestic space. A chair sits in the center of the composition; its seat is crowded by assorted personal items: scissors (of which later evolved into an major independent subject of Mao's oeuvre), a plate of pills and a few scattered ones, medicine, a filled bowl with spoon (potentially medicine within), a dark-toned, matte jug, and a scrap of paper. Embracing the chair are also the similarly quotidian objects -- plastic bottle, insulation pot, sport-wears, and crumpled newspapers. The domestic setting of this painting is revealed to us by several furnitures and home accessories depicted in the background, painted much only by outlines. All the everyday objects Mao incorporated in this painting may play the vehicles to carry and deliver his emotions. What emotions, however, we are not sure of; they can be extremely complex, intertwined, multiplied, or even paradoxical (euphoria vs. depression, for example). And to what incident/circumstance did these emotions emerge? We are not solidly certain either. Perhaps it is after Mao witness that China shifted its ideology to a more commercial, or arguably capitalist, form; perhaps it is the artist's trenchant contemplations on power, especially power at home. (Artfox, 2016, available on https://www.artfoxlive.com/product/157270.html); see also (Mao and Wen, 生命写生——毛旭辉访谈, 2015, Mao Xuhui Studio, available in http://www.artdepot.cn/news/show/id/4254) (Jerry Wu'23).