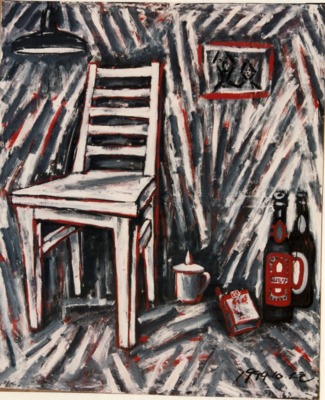 Upon a disordered, yet mesmerizing background painted with white and grey straight splashes, numerous objects are rendered: a black hanging lamp enters but exits the picture frame by the top-left corner; a large, white back chair is placed under the lamp, facing us; besides the chair, placed presumably on floor (the totalizing background does not allow us to read the environment), are a few beer bottles, a bag of cigarette, and a cup; above the sundries hangs a picture, potentially figural, but the subjects are difficult to recognize given Mao's economical production of them. Black and grey are two dominating colors across the canvas. Their dominance marks the painting a sense of desolation, depression, and loneliness. Adding to the sense is the vacant seat -- no one has appeared in the picture; yet the beers and cigarettes announce human presence. It is the presence marker of beers and cigarettes that emphasizes the absence pointed out by the seat, and thus highlights the loneliness by contrast. What could the loneliness infiltrating the painting be felt about? What, ultimately, inspired Mao to write out the pressing solitude? Curator of one of Mao's exhibitions Stefanie Chow (Zhou) tells us it might be power. Power, Zhou says, may produced the loneliness Mao was eager to map out in the work. (Zhou, 权力的意象, 2018, Mann Art, Available on http://www.maanart.com/index.php/Home/Article/detail/id/78) (Jerry Wu'23).