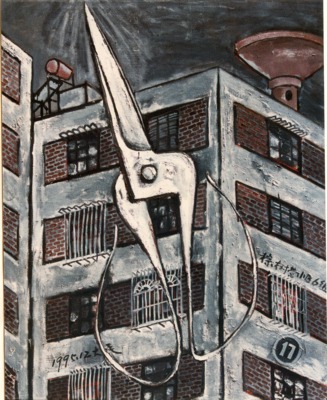 Looming in the picture's background is a multi-storied apartment, built with grey cements and maroon bricks. The estate name of the building "ZongShuYing 棕树营" is denoted on a wall by the right of the apartment. "A Cold Day" -- the weather of the setting is suggested by the work's title, and we can trace evidence of the chill by the fog blocks on the building' windows (an effect of condensation caused by the temperature difference of the interior and exterior). Superimposed before the building is a pair of disproportionately giant scissors, in color of silver or white. The scissors seems to suspend in the mid-air right in front of the apartment. The pointed head of the scissors is directed upward to the sky to the picture's margin; its directing is answered by a few converging, almost radiant stokes painted in the sky, as if the sky is abruptly disturbed by the pointed "intruder". The connection between the giant, floating scissors and its background is obscure. The scissors may play a vehicle for Mao's feelings transpired in real life (symbolism played by his apartment); may the emotions be confusion, fury, and melancholia triggered by the swift social changes occurred in the late 90s' China. (Zhu, 剪刃-毛旭辉2005年个展 -- 毛旭辉的剪刀情结, May 10, 2005, available on http://www.tcgnordica.com/2005/cutting-edge/) (Jerry Wu'23).