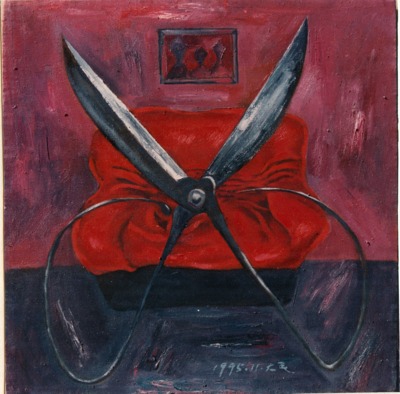 In the background of the work stages a visceral-red sofa frontally. The sofa is depicted with almost minimal details; we can only recognize its volume by a few crudely applied shadows and crumples on the sofa's body. Above the sofa, a relatively small framed picture hangs on the wall. The picture registers a number of geometric forms (some rhombus and triangles) without further viable identifications. In the painting's foreground, a tremendous scissors stands opened. Its metal texture is told by the reflective finish painted with white and bitumen. The connection between the giant scissors and its background is obscure. The scissors may play a vehicle for Mao's feelings transpired in real life (symbolism played by the quotidian objects); may the emotions be confusion, fury, and melancholia triggered by the swift social changes occurred in the late 90s' China. (Zhu, 剪刃-毛旭辉2005年个展 -- 毛旭辉的剪刀情结, May 10, 2005, available on http://www.tcgnordica.com/2005/cutting-edge/) (Jerry Wu'23).