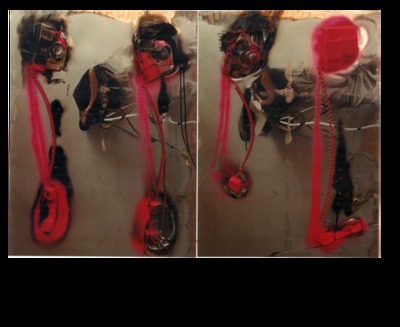 The bottom layer of this work seems to be completed by two damaged large mirrors by flame; we can see some apertures and diluting blacknesses on the mirrors' surfaces that might be brought up by the burning. Upon the damaged mirrors, LIU Yan placed a few likewise damaged (by flame) ready-made objects -- the most identifiable ones are telephones and cameras. Some parts of the objects superimposed upon the mirror even penetrate through its apertures opened by the fire , subtly merging the two components of the work into a totality. At the work's finish, LIU Yan applied some visceral red pigment upon the objects and mirror. Many of the objects placed serve as indicators of human "civilization and culture" ("human produced telephone"); by displaying the "civilizing" objects in ruined form, the artist wishes to cast doubts on the "civilization" which human invested so much for, as well as to suggest the beauty in alternative forms -- perhaps in the crude, in the wasted, and perhaps in the very parallel of the new and the used. (Wang, 刘彦 在自己的内心延伸出了自然的推移， 艺术家作为个体在特定场域中的公共意识 (Artists' self-specific public awareness), available on http://www.namoc.org/xwzx/hzmt/hz2013/ysh/ysh201309/201310/W020131010507354623106.pdf) (Jerry Wu'23).