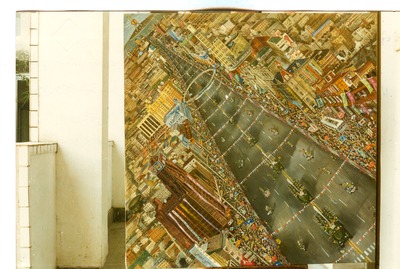 This painting capture the Nanjing Road in Shanghai as in the progress of a military parade. On the road there are numerous cars and motorcycles driving people dressed in olive green uniform -- potentially military personnels. The road is evacuated exclusively for the ongoing parade. On the two sides of the road, unaccountable figures crowd on the sidewalk for the performance happened before them. Several buildings surrounding the road are also registered by the artist. The painting adopts a rigorous linear perspective with the converging lines according with the diagonal of the canvas. Though the perspective of the painting is organized by a system, the composition of it is rather disorienting, crowded, and focus-less. To explain his crowded composition and the appeal to illusionism, LIU claimed "Although everyone thinks realism (naturalism) is outdated, I don’t want others to be confused after seeing my paintings. I don’t think such things (confusion) are useful at all." (Jia, 比喧嚣更喧嚣--刘大鸿访问, ArtlinkArt, August 2003, available on http://www.artlinkart.com/cn/artist/txt_ge/a9datA/e36ezym) (Jerry Wu'23).