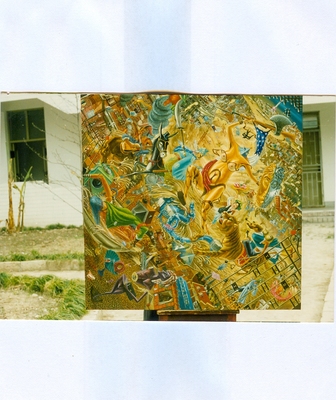 The backdrop of this painting is constructed by numerous architectures, of which mutually disproportionate, disorienting, and some even are opaque. Emerged in the center of the building complex is a half-aquatic, half-pneumatic tide in gold (blended with a little ocher). The mysterious tide flows among the buildings without an uniform direction and force. Layered about the tide are a few depictions of figures (or parts of figure) and animals. Staged at the center, for example, is a head-less figure holding an amalgam object of an axe, a flag, and (perhaps) a javelin; on the either side of the central figure looms a horse and a tiger respectively, with their face and body echoing toward the central figure. (Jerry Wu'23).