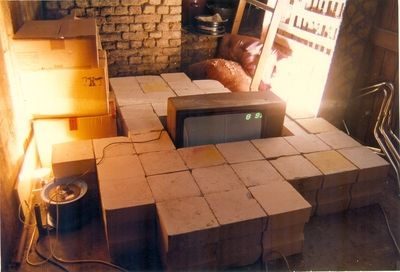 In this installation, stacks of bricks (in vertical alignment of three) expand and fill the space of s room. By the center of the brick-matrix, a television is placed in the hollow concave absent of any bricks -- the television "sinks" into the brick sea. The television is not displaying anything besides a green numeric "8 91" illuminated by the top-right corner of the screen. The room, other than the bricks and the television, contains also several packed cardboard boxes, a wooden ladder, and several lights. (Other objects may also present in the work which are not captured by the photograph in this collection). (Jerry Wu'23).