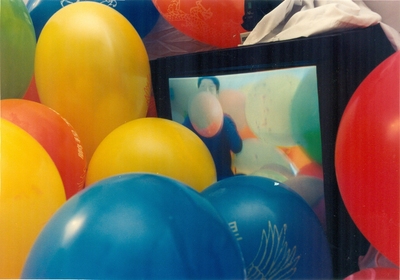 Residence of the artist

In a small area enclosed by white canvas, LIANG Juhui inflates the massive ballons with his own exhalation from the previous INhalation of the fresh air in the room. The ballons thus are charged with respired, carbon-dioxide-ful air after inflation. Music from the speaker is played with the task progressing. After the artist finish blowing the ballons -- and when he is exhausted by the act of air-infusion -- LIANG Juhui then puntures the inflated ballons with sharp objects, which leads to the explosion of them. This artwork alludes to LIANG Juhui long established concerns for the environment. The circulation of the air (oxygen -> carbon-dioxide) also symbolizes the circle of life (generation and degeneration). (Yachang Art, "没空间，大尾象是这样做展览的", March 18, 2017, available on http://former.cfbond.com//ysp/ddys/201703/t20170318_5212126.html) (Jerry Wu'23).