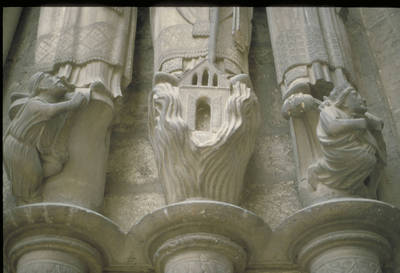 Chartres Cathedral, socle figures from the south portal socle figures of the inner three figures on the left jamb of the Martyr's Portal (left porch), 12th century, Early Gothic sculpture, France. They are under St Stephen (a Jew with a scroll?), St Clement (the underwater chapel built by angels to shelter his body, after he was thrown into the Black Sea with a millstone around his neck), and St Lawrence (the Emperor Valerian, who ordered his martyrdom, with a demon seizing him by the neck). With thanks to James Bugslag for the preceding information.