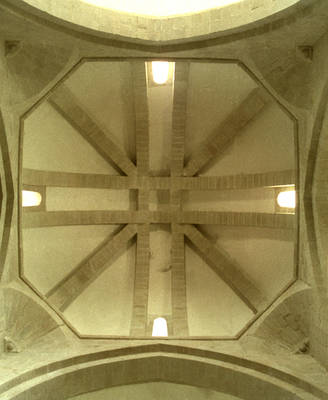 Dome (interior) over the transept crossing, Real Monasterio de Armenteira (Armentera), Spain. Note the technique of parallel ribbing sometimes called ""califal"" or ""mudejar."" First built by the Cistercians c. 1160 with their usual ban on ornamentation. The style is transitional Romanesque to Gothic. The church, except for its modern altar and cloister (redone in the 18th and 20th centuries) is in its original state. The 20th century work was done by Amigos de Armenteira headed by Dr. Carlos Valle-Inclan.