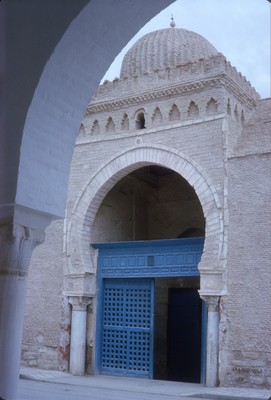 Close view of one of the entrances of the west façade of the Great Mosque of Kairouan. The mosque "is located in the historic walled district of the Medina, between the Rue de la Kasbah and the Rue el Farabi. The mosque, as it stands today, was built by the Aghlabid governor of Kairouan, Ziyadat Allah, between 817 and 838. He erected the building on the site of an older mosque, originally constructed by Uqba ibn Nafi at the time of the 670 AD Arab conquest of Byzantine North Africa. Although the current mosque retains virtually no trace of the original seventh century building, it is still generally referred to as "Mosque of Sidi Uqba," or,"Mosque of Uqba Ibn Nafi." Historically, it has been accorded great significance as the first mosque in the first town of Islam in the West." (Source: "Jami' Uqba Ibn Nafi'." Archnet. Accessed January 22, 2018. https://archnet.org/sites/3763.)