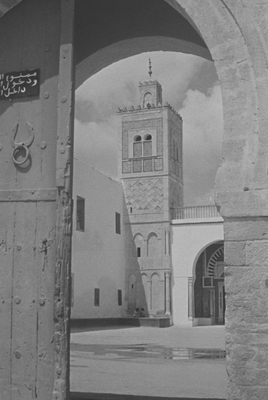 Peering through the outer entrance of the Sidi Sahib complex situated in Kairouan, one of the oldest cities of Islam. The complex is named after and "built in memory of a companion of the Prophet, Abu Zama'a al-Balawi, who died in combat in the year AH 34 (AD 654)." Abu Zama'a, whose mausoleum lies within the complex, was "known affectionately as Sidi Sahbi and considered to be the patron of the town ... His mausoleum is the one most visited by the Tunisians, who flock there during the Festival of Mulud to commemorate the birth of the Prophet." In this picture, we can see the northwestern corner of the courtyard that precedes the entrance to the mausoleum and its elegant Hispano-Moorish minaret. -MA (Source: Saloua Zangar "Sidi Sahib Zawiya and Madrasa" in Discover Islamic Art, Museum With No Frontiers, 2017. 2017. http://www.discoverislamicart.org/database_item.php?id=monument;ISL;tn;Mon01;10;en)