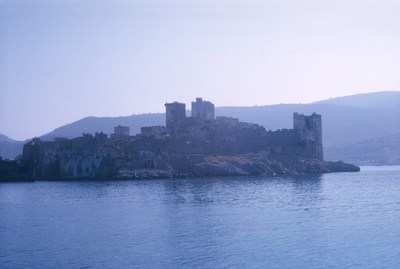 The historic Castle of St. Peter, also known as the Bodrum Castle, situated in the port city of Bodrum, Turkey. "The Bodrum castle is a historical landmark with a lot of different battles and historical figures under its belt. The full name of the castle, which is regarded as one of Bodrum's most notable landmarks is the Castle of St. Peter the Liberator of the Order of the Knights of the Hospital of St. John of Rhodes. This castle stood as a stronghold for over six centuries and was one of the most notable military garrisons. The entire compound was around a small village and today, the castle has been turned into a historical museum." (Source: "History of the Castle." Bodrum Museum. Accessed October 23, 2017. http://www.bodrum-museum.com/history-of-the-castle/.)