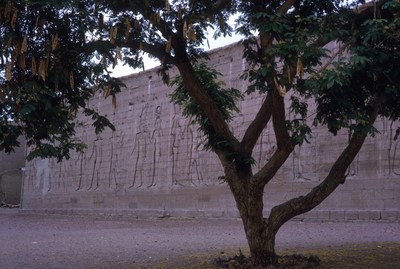 A view of one of the exterior faces of the historic Egyptian temple from the Ptolemaic period at Edfu. Edfu "was the site of the ancient town of Dbot, which was known in Graeco-Roman times as Apollonius Magna, after the chief god Horus-Apollo. It was the capital of the 2nd nome of Upper Egypt. The site has a long history: mastaba tombs have been excavated here ... and the ancient town lies partly under the modern dwellings, but the temple (built and decorated from 237 BC to 57 BC and based on buildings that go back to the Old Kingdom) remains the best-preserved example in Egypt" (David, 99). (Source: David, Rosalie. Discovering Ancient Egypt. London: Facts On File, 1994.)