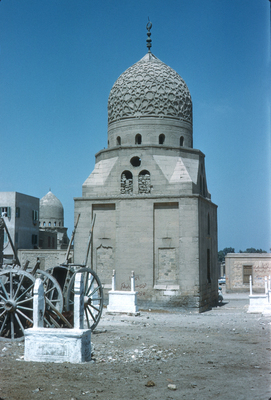 "The Mausoleum of Amir Gani Bak al-Ashraf, built in 1426-27, is adjacent to the Mausoleum of his master, al-Ashraf Barsbay, in the Northern Cemetery. Although Gani Bak had provided for his burial in the complex he built in the city, the amir was much beloved by the sultan and his remains were interred in this new tomb. The carved stone dome of the mausoleum is one of the earliest with an interlacing star pattern on its exterior. The two-dimensional geometrical designs were brilliantly adjusted to the challenging structure of the late Mamluk dome characterized by a steep rise contracting to a pointed apex. This was a shift from the dominant zig-zag moldings of stone domes from this period, such as that on the dome of the mausoleum which Barsbay built as part of his foundation on al-Mu'izz Street (1425)." (Source: "Qubba Gani Bak al-Ashrafi." Archnet. Accessed October 16, 2017. https://archnet.org/sites/2223.)