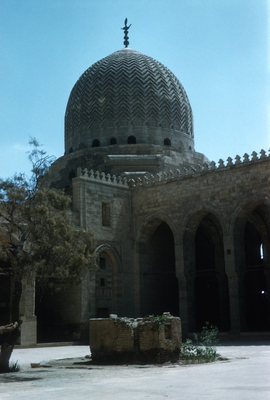 The central court (looking towards the mosque) of the Complex of Sultan Farag Ibn Barquq. "The primary designation of this monument is that of khanqah, an institution for Muslim mystics or holy men, but its basic plan of arcades off a central court is not very different from that of a congregational mosque" (239, Williams). "The khanqah is unique in its inclusion of twin minarets [see B05.073 for one of them], twin carved masonry domes covering the two burial chambers, and twin sabil-kuttabs, all organized in bilaterally symmetrical fashion. However, the plan, which comprises a hypostyle scheme deploying arcades on piers and an open central courtyard with adjoining arcades, is that of a congregational mosque. Unlike madrasas, which adopted the extroverted four-iwan plan with the students' cells looking onto the streets and which expanded their role to include Friday prayers, khanqah architecture generally adopted an introverted scheme to ensure the necessary seclusion for the Sufis. However, many of the living units of the khanqah of Faraj have their windows facing outward toward the desert and structures of the dead, which would serve as objects for contemplation" (archnet). (Sources: "Khanqah al-Nasir Faraj ibn Barquq." Archnet. Accessed October 12, 2017. https://archnet.org/sites/2209; Williams, Caroline. Islamic Monuments in Cairo: The Practical Guide. The American University in Cairo, 2002.)