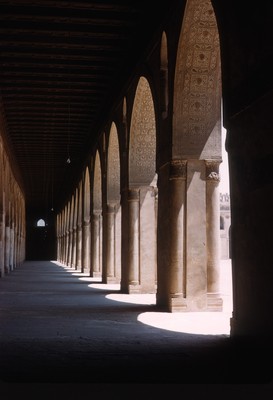 A wide view of the giant piers supporting the arcade on one side of the courtyard of the Ibn Tulun Mosque. "The arches are outlined with an edge of carved stucco. It appears that all of the arcades originally had soffits of carved stucco similar to those that have been restored in the southern arcade. The use of red brick covered with stucco decoration is a feature imported from Samarra, the court city of the Abbasids, one hundred kilometers north of Baghdad. This royal city existed from 836 to 886. Because Samarra extended over a vast area and was built quickly, an efficient and rapid way had to be developed to decorate vast surfaces of brick. Wet plaster was stamped with carved and patterned wooden molds. It is this so-called Samarran decoration that one finds around and under the arches, on the capitals of the pilasters, and on the wooden panels over the entrances in the Mosque of Ibn Tulun" (52). (See B05.060-61 for more detail on this mosque.) (Source: Williams, Caroline. Islamic Monuments in Cairo: The Practical Guide. The American University in Cairo, 2002.)