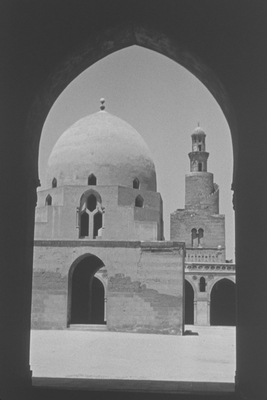 A view of the domed structure covering the ablution fountain in the center of the courtyard of the Ibn Tulun mosque. In her account of important monuments in Cairo, Caroline Williams writes: "If one has time to see only one Islamic monument in Cairo, it should be this one. Its simplicity and grandeur of scale make it the most moving of the great mosques" (50). "Ahmad ibn Tulun was the son of a Turkish slave of the Abbasid caliph al-Ma’mun. He was sent to Egypt in 868 as governor of al-Fustat, but within two years he had been made governor of the whole country" (50). "The mosque was built between 876 and 879 and is important for several reasons. It is the oldest mosque in Cairo that remains essentially as it was built. It also survives as a rare example of the art and architecture of the classical period of Islam, the ninth and tenth centuries, for it was built at a time when the influence of the Abbasid court in Iraq was dominant in the Islamic world. Its inspiration is thus almost exclusively Mesopotamian. Finally, this mosque provides one of the best examples of the classic congregational courtyard plan" (51). (Source: Williams, Caroline. Islamic Monuments in Cairo: The Practical Guide. The American University in Cairo, 2002.)