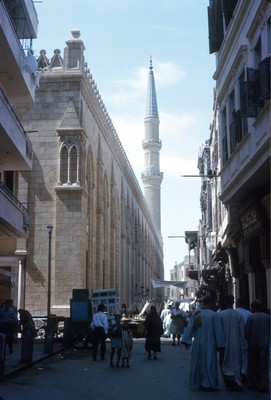 One of the exterior faces of the Mosque of Sayidna Hussein (Our Lord Hussein) in Cairo. The mosque is named after "Al-Husayn," who "was the son of ‘Ali, the Prophet Muhammad’s son-in-law and the fourth and last of the orthodox caliphs. After his father was assassinated, Husayn was urged to claim the caliphate, but he was killed at the Battle of Karbala in Iraq in 680, an event commemorated by the Shiites with yearly rites of flagellation. A head believed to be Husayn’s was brought to Cairo in 1153 and a shrine built for it on the site of the mosque. All that remains of the Fatimid structure (and even this is doubtful) is the lower part of the gateway at the south corner of the present mosque— the Bab al-Akhdar. A minaret with wonderfully carved arabesque panels in stucco, added by the Ayyubid Salih Nagm al-Din in 1237, rises above the remains of the Fatimid gateway; the additional Turkish-style minarets [one of them visible in this image] are part of Khedive Ismai‘l’s Italianate Gothic mosque of 1874" (Williams, 217-8). (Source: Williams, Caroline. Islamic Monuments in Cairo: The Practical Guide. The American University in Cairo, 2002.)