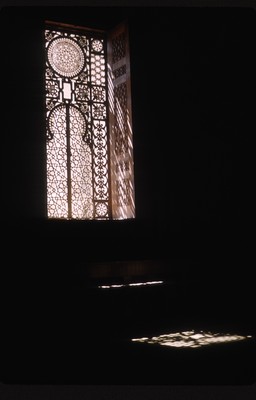 The mashrabiyya (see next image for the meaning of this term) in the tomb chamber of the Al-Rifa'i mosque, "which lies opposite the Madrasa of Sultan Hasan, on the site of a zawiya acquired and demolished by the princess Khushyar, consort of Ibrahim Pasha and mother of Khedive Isma‘il (1863– 79). The architect Husayn Pasha Fahmi was empowered to build a mosque with tombs for Shaykh ‘Ali al-Rifa‘i, a saint formerly buried in the zawiya, and Shaykh ‘Abd Allah al-Ansari, a companion of the Prophet, as well as mausoleums for the founder and her descendants. The result is one of the earliest revival monuments in Cairo. Its neo-Mamluk architectural style and decoration establishes a visual relationship with its neighbor built five hundred years earlier, even though the plan— with its overall symmetry and frontal axiality as well as the large number of funerary chambers around the central prayer chamber— is quite novel" (71, Williams). For a wider view of the El-Rifa'i mosque, see images B05.020, B05.022 and B05.030. -MA (Source: Source: Williams, Caroline. Islamic Monuments in Cairo: The Practical Guide. The American University in Cairo, 2002.)