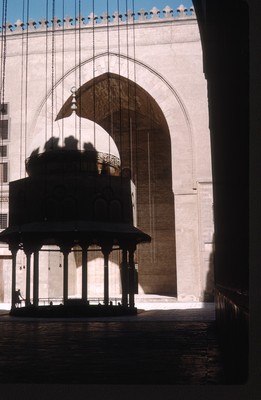 The center of the Hasan complex: "… a magnificent court paved in marble with a decorative fountain in the center. On each side of the court is a soaring iwan, and the corners of the building between the arms house madrasas for the four orthodox schools of law. Each has its own smaller court surrounded by four or five stories of rooms for students" (83). Of all the iwans, the south-eastern one "is spanned by an enormous vault which contemporaries believed surpassed the Sasanian arch at Ctesiphon, considered one of the wonders of the world" (83). Baly has not pictured the whole iwan to give us a view of the giant vault described here, but he has pictured its interior (see B05.027-8). -MA (Source: Blair, Sheila S., and Jonathan M. Bloom. The Art and Architecture of Islam: 1250–1800. New Haven and London: Yale University Press, 1994.)