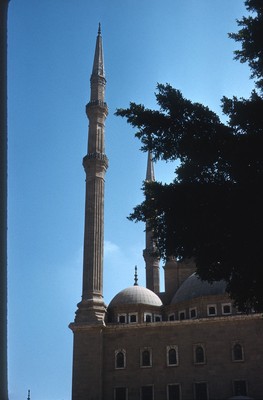 The mosque of Muhammad Ali, "the Ottoman soldier of Albanian origin who became governor-general and effective ruler from 1805 to 1848" (Blair, 309). It "covers over five thousand square meters," and "is the largest mosque built in the first half of the nineteenth century" (311). The mosque's overall design consists of "a square forecourt (55 by 57 meters) preceding a square prayer hall (45 by 46 meters) covered by a central dome and four semidomes resting on four great supports" (311). "The corner turrets are elongated and fussy versions of Mamluk mabkhara ("incense-burner") minarets, while the 84-meter minarets are themselves unusually attentuated" (311). The design of the Mosque, Blair and Bloom write, "was not based on the traditional Islamic architecture of Egypt ... but on a rather vague knowledge of Ottoman imperial architecture" (310). (Source: Blair, Sheila S., and Jonathan M. Bloom. The Art and Architecture of Islam: 1250–1800. New Haven and London: Yale University Press, 1994.)