B05.016 Mosque of Sultan al-Nasir Muhammad 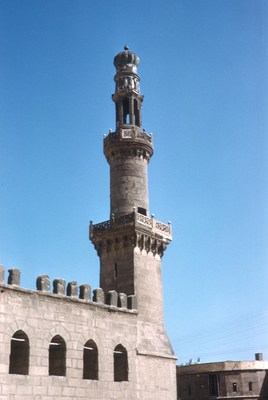 The Mosque of Sultan al-Nasir Muhammad is considered to be "notable for its two different minarets. One is near the main entrance, and the other is in the northeast corner [the one visible in this image] so that the call to prayer could be projected into the northern enclosure, where the troops were garrisoned. Stylistically they have no parallel anywhere in Egypt. They differ from other minarets of this period in their fluted bulbous finials and glazed faience on the sides" (Williams, 226). "The shafts and tops are believed to have been built in 1335. They are the only minarets in Egypt whose bases are below the level of the roof of the mosque. A possible explanation is that these bases predate the raising of the roof in 1335. According to Maqrizi, Amir Qawsun hired a Tabrizi architect to build his mosque (1329-30), which had two minarets modeled after the minarets on the Mosque of Vizier 'Ali Shah Ghilani at Tabriz (none of these exist today). Also fashionable in Ilkhanid Persia were faience mosaics, which, on this bulbous top, are executed in green, white and blue, like those on the sabil attached by al-Nasir Muhammad to the madrasa of his father Qalawun (sabil 1326, mosaics probably after 1348), with an inscription band of white faience mosaic around the neck of the bulb" (archnet). (Source: Williams, Caroline. Islamic Monuments in Cairo: The Practical Guide. The American University in Cairo, 2002; "Masjid al-Sultan al-Nasir Muhammad ibn Qalawun." Archnet. Accessed September 11, 2017. https://archnet.org/sites/2737.) -MA